"When I was in undergrad, I remember sitting in a lecture given by one of my favorite professors. The talk was on her research on the American Chestnut tree. She flipped through slideshow images of old black and white photos of magnificent trees, towering over the men standing beside them. Once growing upwards of 135 feet long, the tree was all but wiped out by a merciless fungus called Chestnut blight. The American Chestnut struggles to survive now, at best the trees produced fine wood growing to half its original size they were home to many critters before withering away. Dr. Collins then spoke of efforts to bring the American Chestnut back to its former glory. I left the lecture feeling sad, but hopeful for the once great tree. This was when I first realized the importance of/my interest in endangered species restoration.

Fast forward three days, and we have successfully cut around dozens of cages and tubes (in thick brush and in the hot sun). Many of the tubes and some of the cages, showed no sign of life. The seedlings had not survived, however, a few American Chestnuts proved resilient, with one even surpassing me in height (I’m tall for a lady). The return of the Chestnut as it once was may seem like a long shot, but with continued hard work of researchers, non-profits, AmeriCorps volunteers, and other people who care, the American Chestnut has a fighting chance. I’m so glad to have had the opportunity to play a part in its comeback story. Best of luck, American Chestnut. " 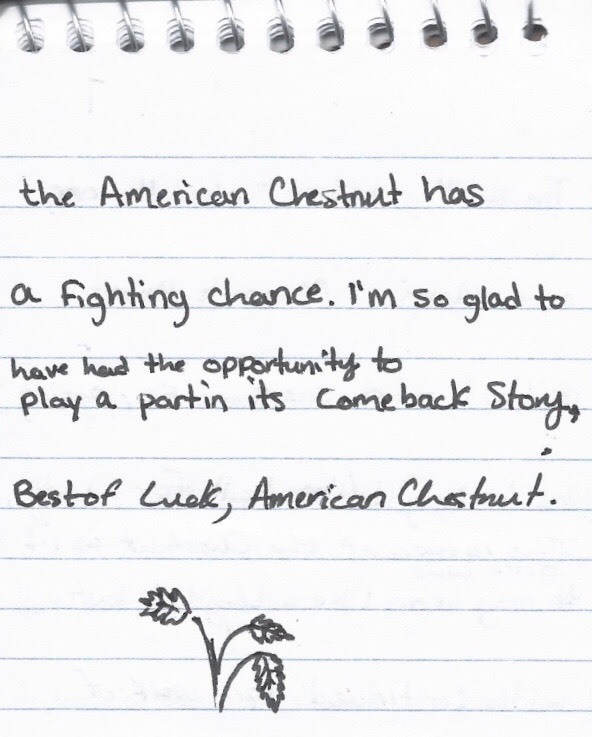